I wiped the conden­sation from the win­dow of the mini-cab that carried Josie and me through the dark rainy streets of north-west London, and gazed capriciously at the rush hour traffic with eager anticipation. Of course, I had spanked before in the cause of duty and for personal pleasure but this was the first time I had attended an organised spanking party. Josie and I had been invited to Peaches as guests, plus I knew Lesley, my dear friend and mentor would be there and I had a score to settle with her. No doubt regular readers of Kane will remember how she and jay scared the hell out of me by threatening to give me a damn good thrashing at our November show.

Eventually we arrived at the given location in Vauxhall, and were greeted by Brad, our host, who quickly ushered us through a narrow side-door and into a dimly lit bar. After rush providing us with alcoholic refreshment, Brad escorted us to a room upstairs where the evenings action was to take place.

The gathered punters sat waiting impatiently on plain wooden chairs that had been neatly formed to make a circle, and were fervently chatting amongst themselves.

When the girls arrived there was quite an assortment, there was twenty-two year old Miranda, a bubbly, well-built girl; Theresa, a 24 year old I.T. student with pierced lip and tongue; KaraJayne, a tall, slim, blonde stunner, Big Mel, who has graced the pages of many a spanking magazine, Sheena, a petite Filipina girl, and of course Lesley, who needs no introduction.

I was rather puz­zled by the fact that all of the girls were dressed as Maids. Now I’ve seen, and spanked many a girl dressed as a French Maid, and like any red-blooded spanker I wouldn’t turn down the opportunity to spank one, but having six in one go – that’s just plain daft! Isn’t variety supposed to be the spice of life? The participants, who had parted with a rather large wedge of their hard earned cash, could have been tempted by a bevy of cos­tumes: a naughty schoolgirl, a sexy stocking clad nurse. They could have been offered the chance to spank a sybaritic secretary or join the mile high spanking club with an airline stewardess, chastised a cheer­leader or pulled down the pants of a power-dressed exec­utive. But this was not the case. I couldn’t help but wonder if I’d missed something but then all was revealed, there was a plot. Yes, that’s right, a plot! Brad, wearing his garish ‘Lord of the Manor’ waistcoat stood up an informed the gathered ensem­ble that two crates Champers had been pilfered by the maids, and that rather than dock the cost of Champers from their meagre wages, they were now to be punished by the Butlers, ‘i.e.’ those amongst us that had paid for the privilege; and me who hadn’t.

The first part of punishment was over-the-knee hand spanking, and I now under­stood why the chairs were in a circle. Within an instant the room was filled with the sound of palms smacking against nubile bottoms and my ears filled with squealing high-pitched girlish wails of yes sir, thank circle of male laps where eager hands raised their skirts and pulled down their knickers.

The hand-spanking session over, and now that the girls bums were warmed up it was time for another circuit of buttock warming, only this time the girls found themselves touching toes and kneeling upon chairs as they offered up their glowing behinds for wal­loping with paddles, straps and tawses. 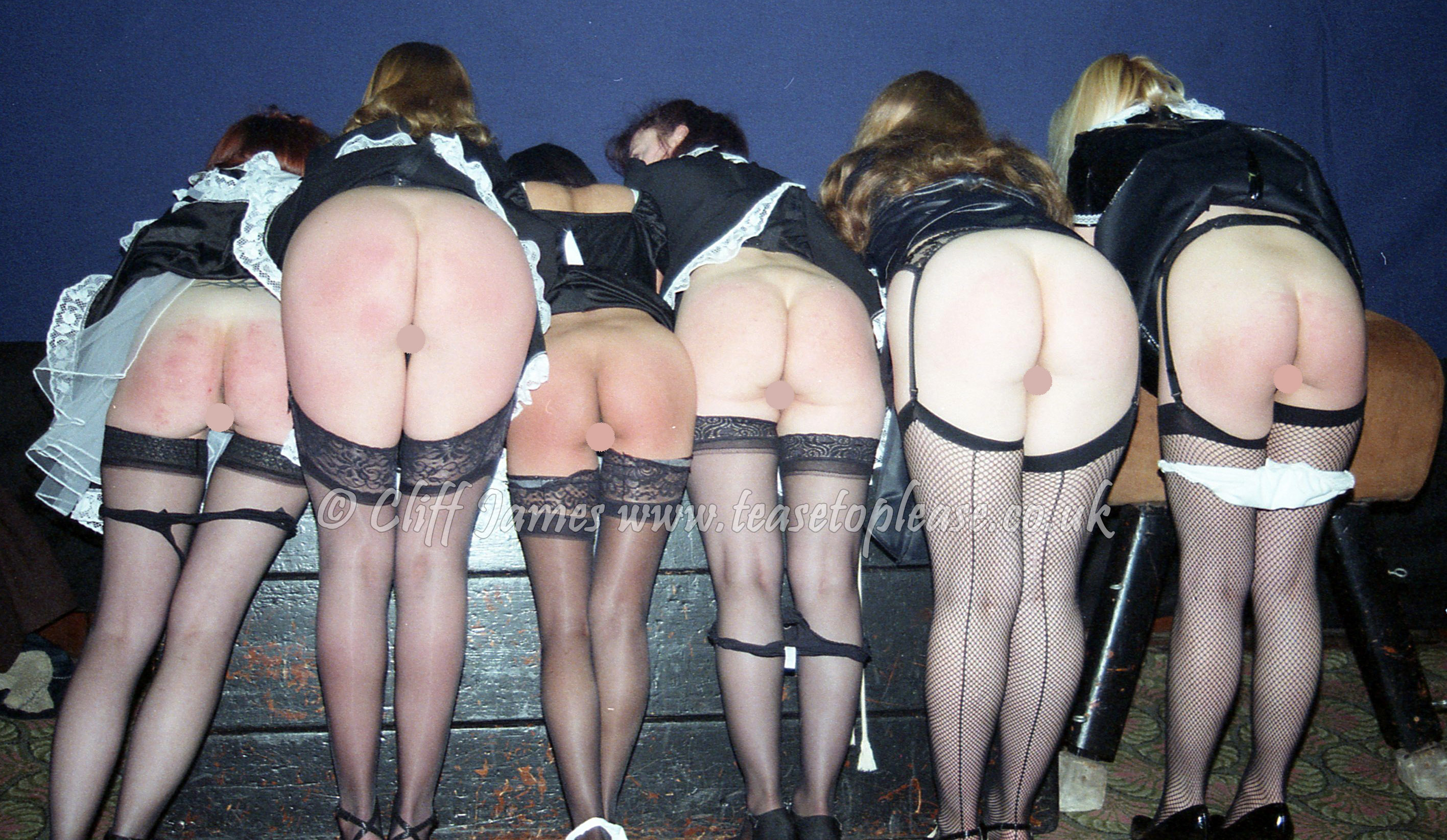 Then it was on to what I can only describe as a ‘Lucky Dip’ where the paying customers were called out by name and told which girl they were spanking, although it was arranged that they would get to spank each girl. The spanker would then choose two coun­ters of which one would determined what implement, and there was quite an assortment including: tawses, paddles, canes, straps and crops, would be used. The other was to decide how many strokes, and this ranged from 6 to 24, need­less to say the counters were placed face down so that it was a lucky dip! At this point things started to go wrong, the man from, Peaches, Brad tried to keep things running smoothly, he didn’t, but that’s not a criticism as I know from personal experience what it is like to organise spanking shows.

The finale of the evening was that each girl would receive three strokes of the cane from each guy, and they did. But what an anti-climax! It was so rushed that there was no time to savour the applica­tion of pliable rattan to bare female buttocks; it was a real case of ‘wham bam thank you ma’am!’

My honest opinion of the evening: Apart from being rushed from girl to girl at a speed likened to that of Concorde in supersonic-flight, it was fun, and it’s always nice to meet and mingle with pretty girls, especially bare bottomed ones who are part of the CP. scene and who grace the pages of spanking magazines, though if I had paid for the privilege of attending I would have been disappointed that we were not permitted to mix, mingle and chat with the girls at the bar before the show Kane marks for this event 6/12

And for those who weren’t there, yes, I did settle my score with Lesley, though rumour has it the threat of her giving me a beating still stands. Lesley, you know where I am…

With thanks to Brad and all of the girls for an entertaining and fun evening.

Many years after this review was written our friendly host Brad was sadly brutally murdered in his own home. even though he used to rip spanking producers off including Kane by pirating our videos we wouldn’t have wished this upon him.