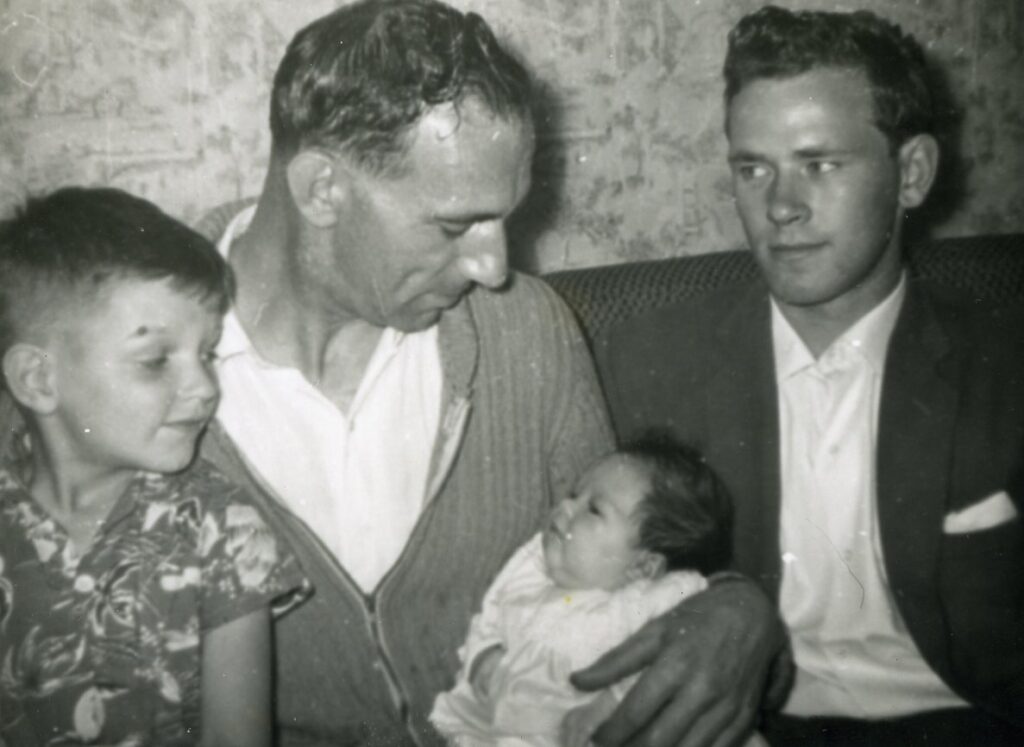 Left to right: Me, dad Jim, my niece Anna and my brother Clive Robert Langslow in happier times.

Clive Robert Langslow, the person I knew and loved as my brother. Clive is 15 years older than me bar one day. Life is complicated. As a child I loved this man, in fact I more than loved him I adored him. I looked forward to the days he would come and visit. He would take me scrambling through the dirt tracks of bluebell woods on the back of his motorbike. We’d tear through the forest. Navigating, going down and then up the deep muddy ditches. Me clinging on to him like a limpet for dear life. Clive would take me to the barbers when mum was working. One habit he had was turning up for a visit out of the blue. If no one else was home I’d make him something to eat. It was usually an omelette as that was all I knew how to do.

Later in life as a man there were times in his life I felt that I should be with him. I went to certain buildings with him to show my support when he found himself there for no reason of his own. As much as I loved my (brother) and I presume at the time the feeling was mutual we had an understanding. He said, I will always be there for you but I won’t interfere with your life. I won’t be in your pocket, even though he was welcome to be there.

Regrettably life is not a fairy tale and there is not always a happy ending. This is the case with Clive and me. I wish I knew what happened to turn him so venomously against me, and worst of all his mother. It hurts that the brother I knew and loved so much walked away from us. Worst of all the woman who gave him life. (Our) mother had turned ninety-one, she had become frail and was in out of hospital frequently in her final years.

Sadly she could no longer look after herself and realised she needed to go to a care home. It wasn’t her mental capability that was the problem as that was good as ever. Tearfully she asked for this to be arranged.  It was during this period that Clive left the fold. It was heartbreaking. I couldn’t understand what had caused him to become so bitter. It was left to me to break this sad news to her. She couldn’t believe it. I called Clive using my mobile phone and told him to tell her himself. Full of sorrow I listened to the phone conversation. When he told our mother that he wanted nothing to do with her or me, she was devastated.

Due to a prolonged illness Clive died soon after he left the fold. If it wasn’t enough that the man I loved as a brother had died while there was bad blood between us I had to break the dreadful news to mum and break her heart yet again. Now there was no chance of a reconciliation. The grim reaper has ensured that the bad blood he caused could never be cleansed.

These days I am older and wiser. I understand what made my loving brother become bitter and hateful towards us. I remember so many things from my childhood days and realise now that he was looking in from the outside when it should have been the other way round. This of course was something that was beyond my control. At the time when I was a child I didn’t understand or give thought to the situation; but now I do.

My sister in law who I also loved told me that I had never really been a brother to Clive. Perhaps she was right, but that stems back to what he said “I will always be there for you but I won’t interfere with your life or be in your pocket”.

On November 27th 2019 (our) mother passed away.  Now they are together again. I hope in death he is man enough to explain to our mother his feelings and why he turned away from us. When I pass away and join them I hope I find out too.

Can I forgive him? The answer to that is yes. Now I realise what he was going through all his life. As I previously mentioned it’s complicated and many in our family know the reason for that.

It doesn’t end there though. I mentioned previously that life is complicated… R.I.P Tony. And as for Juanita Sylvanalita, I wonder if you are alive. You should be as you are younger than me. Yet that still isn’t the end: What happened to the brash sister known only to me as the cream cake woman.

error: YOU WERE TOLD YOU CANNOT RIGHT CLICK, NOW YOU HAVE CAUSED YOURSELF A PROBLEM!
We use cookies to ensure that we give you the best experience on our website. If you continue to use this site we will assume that you are happy with it.Ok