The first video I did the stills for was the Kane video Three Naughty Schoolgirls that featured Lorraine Ansel, Lesley Seye and Debbie Hoare. Filmed it what was then the Kane office where there was hardly room to swing a cat let alone a swishy cane. Lorraine played a truant who was spanked and caned by the headmaster. The scene began with Lorraine being spanked with a slipper and when the camera rolled her spanking began, however, the guy doing the spanking really laid in to poor Lorraine’s backside with so much gusto that we were all taken aback, especially Lorraine who jumped up like a scalded cat. After a brief pause and a word in the spankers’ ear the spanking and filming resumed at a more reasonable level.

As the filming progressed we decided it was time for the finale which was where Lorraine would be caned. I sat in front of Lorraine, out of the view of the video camera and watched as the cane sliced down across her bare bottom and as I watched I counted the strokes in my head. The room was silent apart from the swish, thwack of the cane as it impacted on soft feminine flesh. It seemed like the caning would never stop and I was impressed at how well Lorraine took it. Moments later she jumped up and looked at the camera man. Blimey Pete, that’s sixty strokes, isn’t that enough for you? Pete looked at me, ”I was waiting for Cliff to say enough, he said, ”but I was waiting for you Pete,” I replied, which I was. Oh dear. Thankfully Lorraine took it in her stride. A lesson well learned for all of us. 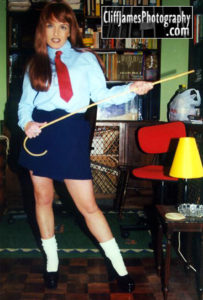 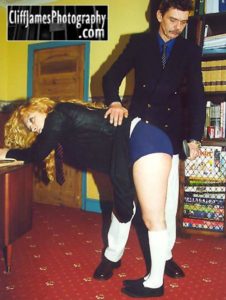 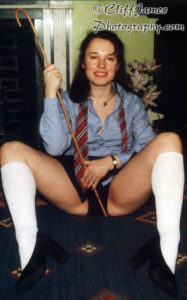